All proceeds from L4T merchandise goes directly to Tony.

Girls & Boys 1st - 8th grades. Select teams from the tri-state area are invited to participate in the annual Laxin4Tony Jamboree. 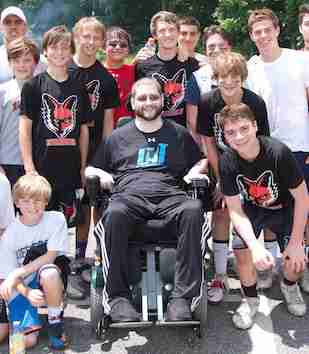 It was twenty years ago, in the spring of 2001, when Tony Ciccone fractured the fourth and fifth vertebrae of his spinal column during a Fox Lane High School lacrosse game against North Rockland. The hit he took did not appear to be devastating at first, but the injury resulted in the young athlete’s paralysis. He was a senior at Fox Lane High School and had a bright future planned with dreams of college and law school. In 2009, Tony and his family moved back to Westchester after a series of misfortunes and serious medical complications including a near fatal episode of gangrene due to poor medical care. Tony and his mother, Linda Ciccone, reached out to the Fox Lane Youth Lacrosse organization for help.

Laxin4Tony was created in 2010 to raise funds to supplement Tony’s medical needs which were not covered by Medicaid. In the past six years, the annual charitable lacrosse jamboree has provided a specialized hospital bed (a $50,000 purchase), a FES Leg cycle, a stationary bike which uses and assists Tony’s muscles to operate, a device which helps Tony stand, a desktop computer and a Laptop capable of running dictation, productivity and graphically intensive software simultaneously. assistive and adaptive technology to help Tony interact with a computer and things around him and continued maintenance on a handicap van donated to Tony in 2001 by the Maceira family.

Each and every team, player, parent, volunteer, referee and sponsor has a direct impact on the support Laxin4Tony can provide for ongoing medical needs and required adaptive technology. Thank you for your continued support!!

Laxin4Tony is a charity lacrosse tournament started in 2010 to help support a fellow laxer Tony Ciccone who fractured the fourth and fifth vertebrae of his spinal column during a Fox Lane High School lacrosse game in 2001.